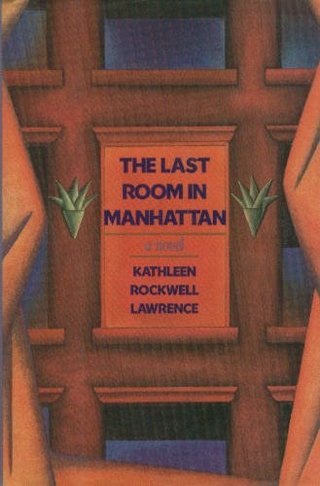 The Last Room in Manhattan

Had she misunderstood, been too forward? No. This was what men and women did all the time. It's just what Karen hadn't done in a while. He stood shifting feet, considering. Karen felt her ardor cooling along with her toes.

She was worried when she saw his place. Home for Mark was maybe a step above her room at the Arcadia. A one-bedroom apartment he had rented furnished years before. The furnishings that weren't his included a couch and a chair done in a once trendy, now dingy, fern motif. The bedroom door was ajar, and Karen could see packing crates and books. He never used the bedroom, he said it was where he stored everything he got in the divorce. It depressed him. A pile of library books lay on the floor in the living room, next to a television and a VCR bearing a red "Ace Rentals" sticker. He was a minimalist before Zoran ever caught on to the scene. A wooden clothes valet held cufflinks, sock garters, a corduroy jacket, and several ties of doubtful taste. The man seemed not to own anything but the items on the clothes valet. Karen was just enough of a materialist to find this fact dismaying. She wanted one of her friends, someone, just one of them, to own something.

"Nice valet," Karen said, grinning, running a hand reverently over the base of its catch-all dish. Mark had doffed his jacket and undone his tie. "Oh, here, let me hang that up!" said Karen, making a show of placing it carefully atop its unattractive brothers between the metal tie demarcations. Nice body, she thought, but didn't say. Hard underneath the loose oxford cloth shirt. You could tell how slim the waist and narrow the hips by the way the shirt bunched going into the baggy chinos. And now he had begun the ceremonial rolling up of his sleeves.

"Are you getting ready to eat or are you really glad to see me?" Karen asked in her best Mae West, but was immediately sorry when she saw how her remark had stopped him, left him without comeback, flushed in mid-roll. She turned away, absently picked up a sock garter for inspection, then, realizing, put it down in mild horror.

He had been watching her intently as he opened the refrigerator and reached for a bottle of Gatorade. "You hate it," he pronounced, and didn't just mean the sock garter. He set the Gatorade on the table, picked up the bag of Chinese food and looked at it as though he hadn't seen it before, set it back down, found a glass and poured her some green. "But I can't help it. It's me. This apartment, these clothes, this refrigerator" (the door still open: ancient, frosted over, and dank) "are what I am. I have no ego."

Karen sat on the couch and sipped tentatively, even though she knew it really wasn't made from alligators. She also knew alligator wasn't endangered anymore, but she had always been a bit picky about what she consumed, and this was such a strange green, maybe squeezed from Everglades slime.

He obliged her as far as leaving the folding chair and moving next to her on the couch. "I thought that was what you wanted. Look, I have to tell you something," he confided. "You're more experienced than I am."

Karen shrugged. She was more experienced than a lot of men. Just not lately. "Don't worry," she said with exaggerated brightness, "I'll show you what to do."

They laughed, then were quiet. She remembered the box in her purse. Damn! "In fact," she said mysteriously, "I even brought props." She stretched and grabbed for her purse, unwilling to leave his side now that she had gotten him here.

"What did you bring?" He sounded nervous. Did he think she had handcuffs or whips?

"You might not love it . . ." She sheepishly showed him the box, and, to make things lighter, quickly explained her birthday present and recited Annie's condom poem.

He laughed, but weakly. "I suppose I should be flattered that you think I'm active enough to have acquired an immune deficiency."

"Yes, you jerk!" She put her hand on his knee and kissed him. "You do want to?" she asked.

"Oh, indeed!" He put his hand in her hair and began massaging her scalp, a little too vigorously.

"But do you want to, really?" She put her hand up on his thigh and wondered if she dared move it higher. His chinos were just too baggy to make an assessment of dilation and blood flow without a hands-on. "Because I think my ego's getting involved here. I happen to have one, and it needs a certain level of enthusiasm in situations like this. So—are you or aren't you?"

"What?" he asked, smiling, drawing her toward him.

She opened her arms and held him. "Enthusiastic!" For answer he suddenly began kissing her, his tongue strong in the recesses of her mouth, his fingers running back and forth over the ribbing of her sweater. It seemed he was. She began to lift her sweater over her head.

"No," he said, pulling it gently back to her waist. "Maybe not now." He was breathing heavily. "I'm sorry," he whispered. "Maybe another time."

Why? Karen wondered, knowing there would be no other time if there wasn't this time. As she searched his face, she felt a flash of anger. "Yes, now!" she whispered back at him, determined that he would at least see her. She pulled her sweater off in a kind of frenzy, she undid her combat boots, then the rest—bra, pants, socks. She wanted to be seen, that was part of it. She would bare herself and make him face her. So much of sex for her was the other's eyes upon her, the watching. She wanted the darkness of his eyes now. She would not be cheated of that, at least, not after so long without, and certainly not after his tongue. She looked at him until he sighed, placed his hands heavily upon her arms, and pulled her back down to the couch.

“If you did have an ego," she told him later as they unpacked the moo shu, “it would have been very proud of your id tonight.”