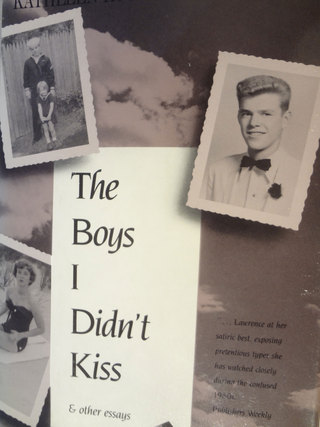 The Boys I Didn’t Kiss: The Collected Essays of Kathleen Rockwell Lawrence

Even though it's all about birthing babies, a traditionally feminine activity, the Vatican's edict of March 11, 1987, "Instruction on Respect for Human Life in Its Origin and on the Dignity of Procreation," which forbids artificial insemination, doesn't consult one real woman in all its forty pages. Actually the only woman referred to by Cardinal Ratzinger (Yes, that guy, Pope-to-Be) and Archbishop Bovonne is Holy Mother Church, as in:

The Church's intervention in this field [procreation] is inspired also by the love which she owes to man, helping him to recognize and respect his rights and duties.

(The Church is a girl, in the same way boats are and hurricanes used to be. It's confusing, isn't it, the way they blame this stuff on a woman, when really it's all men?) Men, however, are quoted and referred to throughout, from the very first sentence:

The gift of life which God the Creator and Father has entrusted to man calls him to appreciate the inestimable value of what he has been given.

There are three words that recur with about the same frequency as the male pronoun: dignity, natural, artificial.

The Vatican now says that sex is natural. Within marriage. It used to be sex was only for having children. If you had fun doing it, it couldn't be helped, but it wasn't recommended. Then the Church recognized what it calls the unitive function of sex, and said that pleasure was O.K. too, if you were married. It was an important concession because it allowed a husband and wife to do it all month long without guilt and without contraception. The new edict has taken it a step further by saying that sex, the actual act, is the only way to conceive.

You'd think that the Vatican would welcome artificial means of conception because it could ultimately free everyone from having sex, make procreation purer. Because, even with the unitive function, sex can't be all that great if the men in charge don't indulge, and forbid their clergy to.

But all is not lost. Catholic medical authorities have suggested an antimasturbatory sperm-collection method! During sex, use a condom deliberately pierced with a hole or two. (These holes are actually loopholes, because an intact condom is a contra-ceptive and therefore artificial.) There will be plenty of sperm left, and the couple can, with a clear conscience use it for insemination because it was produced naturally, during intercourse.

Rev. John Connery of Loyola, a priest and medical ethics consultant for Catholic hospitals, has another suggestion. "If a couple, let's say, had intercourse, and the doctor then took a syringe and went into the vagina and got the sperm and then injected it farther into the uterus or the Fallopian tube—if that could be done, I think you could justify it." Question, to Father Connery: Where is the doctor during the sex act? In the room? Having a cig just outside? Because if you had to stand up and take a cab to the doctor's office you'd lose a lot of sperm. Is the proximity of the doctor and the syringe during intercourse all that natural? Wouldn't masturbation have more dignity?

Abortion is unnatural along with masturbation, birth control, and now artificial insemination. Really, why should the Church should limit itself to matters sexual in its vigilance against the un¬natural? There are so many other things that are unnatural:
Penicillin
Indoor Plumbing
Racism and sexism
Clipping one's toenails
Starvation
Blood transfusions (If you can't have sperm that isn't your spouse's, you sure shouldn't have blood that isn't.)
Organ transplants
Hair dye and nose jobs and pacemakers
Carrying a fetus conceived in rape to term
Starvation in a world stripped of its resources by overpopulation. For, while the Church is keeping people who want children from having them, it's forcing people who don't to have them. Will this world have dignity?